Towards understanding carbon partitioning between starch and other storage carbon compounds

Starch, fructan, beta-glucan, cellulose and lipids are the important storage compounds in higher plants.  Plant yield and quality ultimately depend on composition of the storage products and biomass for each product.  Production of different composition and biomass of the storage compounds is mainly governed by an important metabolic process in higher plants, called carbon partitioning. Plant carbon partitioning has been studied to some extent. However, there are still many issues that need to be investigated, especially in regulatory mechanisms on a molecular level. For instance, which molecules play a role as a “switcher” in orientating the carbon flux to a certain storage compound? How does a regulatory molecule modulate the switcher(s) in directing carbon partitioning?  How do environmental conditions affect carbon partitioning via the molecules. Our previous research has shown that a transcription factor family (SUSIBAs), plant sugar signaling cascades and some hormones (such as ABA) participate in regulation of carbon partitioning. Our main interest is to unravel mechanisms of carbon partitioning between starch and other storage compounds such as fructan, beta-glucan, cellulose and lipids. Our research goal is to master the plant molecular mechanisms of carbon partitioning to manually control the flow of carbon to produce a pin-pointed carbon product, for example, increasing starch production for food industries, generating high content of fructan and beta-glucan in storage tissues for functional food production, and shifting carbon from starch to lipids for bio-energy purposes. Our study is to use barley, rice, Arabidopsis and Nicotiana benthamiana as model plants to gain a proof-of-concept through mutant screening and transgenic approaches. Then, we will apply these concepts to other crops. Our long-term goal is to generate future crops with a compass-directed carbon flux into human-needed and tailor-made composition of storage carbon compounds. 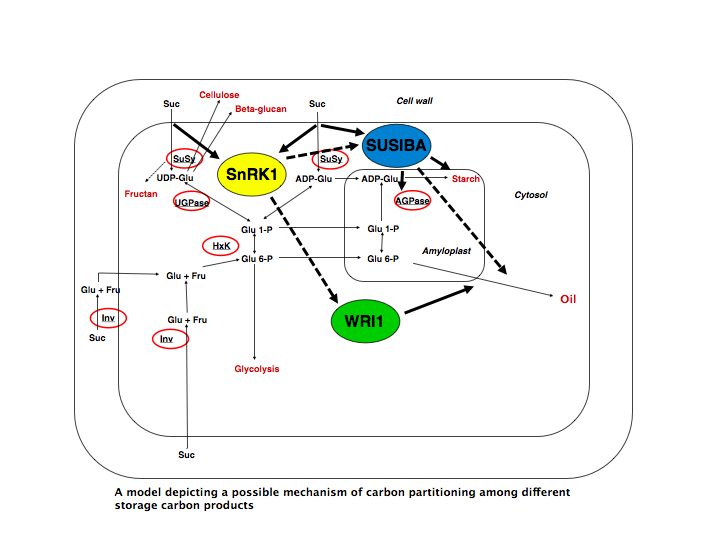