Role of proteolysis in cell polarity and fate decisions

Cell polarity refers to a set of mechanisms that establish and maintain specialized domains within a cell or the plasma membrane. It is suggested to have evolved from ancient machinery responsible for restricting senescence to one daughter during division by enabling the differential segregation of damaged material. One of the most important functions of cell polarity is the control of asymmetric cell division that has a fundamental role in the control of cell fate by producing two cells of unequal size and function. The establishment of cell polarity is achieved through protein and vesicle trafficking along cytoskeleton.

We discovered that at the cellular level, protein asymmetry requires the selective degradation of proteins at the apical or the basal side of the cells. We identified the protease separase in Arabidopsis thaliana as an important component in this process (Plant Cell 2013 25(6):2171-86). We showed that separase forms a complex with molecular motors known as kinesins (the KISC complex; Dev Cell 2016 37(4):350–61). The components of KISC, kinesin and separase, collaborate to control cytoskeleton dynamics, cell polarity and division, thereby affecting cell fate and division fidelity. Recently, we developed tools, such as inducible loss-of-function lines of KISC that will enable us to study interconnections between proteolysis, cell polarity and fate decisions. Furthermore, we recently obtained a high-resolution map of proteolytic events that are required for polarity establishment. We now focus in the elucidation of the function of proteolytic targets in order to provide a functional proteolytic map of cell polarity and fate decisions. 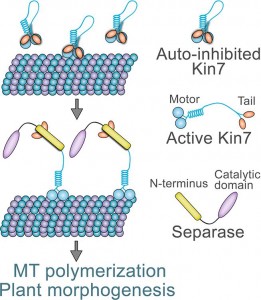 Model for functions of the KISC complex on microtubule dynamics regulation. Kinesin-7 family proteins are in an auto-inhibited state. Separase releases the auto-inhibition, and active Kinesin-7 proteins polymerize microtubules, an important event in plant morphogenesis.

In parallel, we have also brought to bear the unique advantages offered by the model plant Picea abies (Norway spruce or simply the Christmas tree) as an experimental system in relation to cell polarity research. Norway spruce is the most important tree for the Swedish economy, andan excellent platform for cell biology studies owning to the large size of its cells, a tractable developmental pattern and ease of transformation. Recently, we identified potential applications of our work by showing that cell polarity regulation by proteases in Norway spruce is important for somatic embryogenesis (New Phytologist 2016, In press). 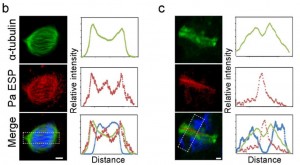 Co-localization of Norway spruce separase homolog (red) with microtubules (green) on an anaphase spindle (left) and on phragmoplast during cytokinesis (right). DNA staining was done with DAPI (blue). Densitometry scans were performed in the framed areas. Scale bars, 5 µm (New Phytologist 2016, In press).

During development or stress the proteome of cells is readjusted. A repertoire of molecular pathways remodels the proteome by promoting selective translation of certain proteins. Yet, translation of other proteins is transiently suppressed through mRNA decay or storage. 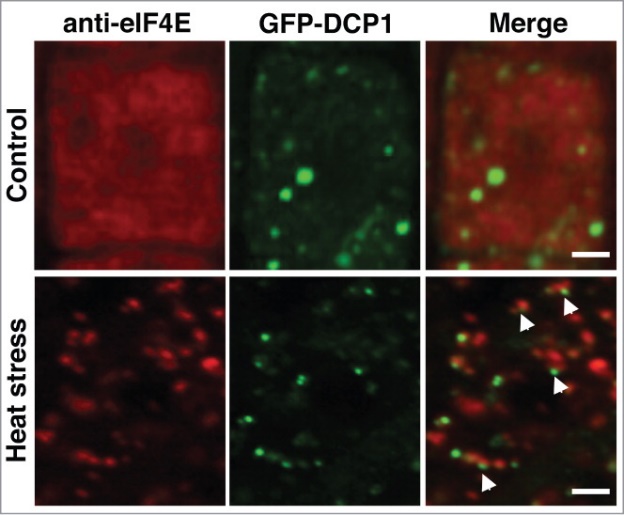 Our recent work revealed that transcriptome remodelling during heat stress is intimately connected with the formation of cytoplasmic ribonucleoprotein (RNP) complexes called stress granules (SGs) and processing bodies (PBs) (Plant Cell 2015; 27: 926-43). Although both types of RNP complexes are present under stress conditions, they serve distinct functions. While SGs are thought to play a role in sequestering, stabilizing and storing mRNAs and translation factors, the main function of PBs is attributed to translational repression and mRNA decay.

While much progress has been made in understanding how PBs control stress tolerance, substantial gaps remain in our knowledge. As RNPs are important throughout plant development and during stress, manipulation of RNPs could conceivably find diverse applications. For example, manipulation of PBs activity may allow greater control over diverse processes such as developmental transitions; alternatively, it might be used to improve stress tolerance in a variety of crop species. Our research seeks to achieve a more complete understanding of RNP complexes, using a full spectrum of molecular, cellular, genetic, and biochemical approaches.