All proteins have at least two tails; one at their N-terminus and one at their C-terminus. Rather fascinating modifications occur at these tails however, too often the functional outcome of such modifications remains mysterious. More than a decade ago, my lab introduced proteomic technologies by which peptides holding these tails are enriched and thus can now be routinely studied by means of mass spectrometry. More recently we implemented ribosome profiling in our overall workflow, which, combined with bioinformatics, allows for deep profiling of proteoforms. In my seminar, I will focus on two widespread protein modifications being protein N-terminal acetylation and protein processing by proteases. N-terminal acetylation typically occurs on intracellular proteins in higher eukaryotes. As this modification largely occurs cotranslationally, it signals for protein synthesis events. I will show how our technology platform was used to profile N-terminal protein acetylation in several organisms and led to the characterization of the substrate specificities of the N-terminal protein acetyltransferases (NATs), shed light on the molecular changes observed in a human disease caused by a mutant NAT (the Odgen syndrome), identified a large number of novel N-terminal proteoforms and allowed us to monitor differences in cellular stabilities between N-terminal proteoforms originating from the same gene and co-expressed in a given cell line. In addition, I will discuss how the same basic proteomic technology can be used to identify substrates of proteases, both endoproteases as well as exoproteases. 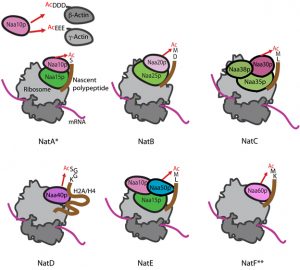